This was the week that the markets woke up to the possibility that they’d have to pay attention to the growing global health crisis.

The major indices turned downward in mid-week and the S&P ended on Friday (1.25%) down from the week before.

Hardly a major reaction as yet, but noticeable.

The BDC sector – as measured by the UBS Exchange Traded Note with the ticker BDCS, which owns most of the sector stocks – was down as well.

However, the impact on individual stocks was more pronounced: three-quarters (34 of 45) were in the red.

Only one BDC moved up (35) or more during the week – Hercules Technology or HTGC.

There were slight movements in some of the key metrics we look at every week.

Instead of having 18 BDCs trading within 5% of their 52 week highs, the number dropped to 17.

At the other end of the scale, the number of BDCs trading within 5% of their 52 week lows increased from 4 to 5 in the week.

(The number of BDCs trading at or above book value remained unchanged at 20).

Mostly, though, BDC prices seemed to enter a “wait-and-see” mode.

After all, there’s a rally going on and the natural inclination for BDC prices of late has been to head upward.

Depending on how the global pandemic plays out, this might be just a brief pause or a turning point.

As usual, we’ll be guided by what happens to the major indices.

We doubt the BDC sector will ignore whatever “wall of worry” investors more generally will be climbing.

In any case, along with the sudden – albeit mild – reversal in BDC sector prices, we also had Week Three of BDC Earnings Season to contend with.

As has been the case in prior weeks, both book value per share of the reporting BDCS and their overall results were a little better than we might have anticipated.

There were six BDCs reporting and 4 reported higher net assets and two lower.

In terms of overall performance , by the time we’d read every BDCs earnings release, filing and conference call transcript, the BDC Reporter rated 4 as GOOD and 2 as MIXED.

There was no clear-cut weak performance as there was the week before with Prospect Capital (PSEC).

See the BDC Resu lkts Summary Table for all the performance ratings to date and in prior periods, as well as for links to any analysis we may have done, including annotating the conference call transcripts.

We’re constantly updating the table with new links to the BDC Reporter’s quarterly review and analysis.

First there was a substantial write-down in portfolio company IHS Intermediate.

That had been placed on non-accrual already and modestly discounted in the IIIQ 2019, but was written down even further this quarter: ($11.250mn).

The investment is now discounted (70%) by SLRC and (75%) by GSBD,  which has an identical position.

A second setback was that in the BDC’s asset based lending business a loan “experienced fraud”.

As is often the case in these situations, SLRC was very tight lipped with details. We were told:

Details are scarce, but Crystal Financial’s financial statements show that the number of their troubled credits has increased from 2 to 3 since 2018.

Furthermore, the balance of the troubled credits has increased from $4.7mn to $15mn in the just twelve months.

Overall for the year 2019 SLRC’s realized and unrealized losses were twice those of the year before.

Otherwise,though, the news at the BDC  was mostly good, with net investment income per share (just) covering the distribution; good credit quality elsewhere and plenty of unused borrowing capacity.

Nonetheless, the market was unforgiving, bringing the stock price down (6.0%) on the day of the results.

No wonder SLRC was the Biggest Loser in price-terms on the week, with an even bigger drop than Goldman Sachs BDC (GSBD), which dropped (4.5%).

Both Good And Bad

GSBD also reported MIXED results: good earnings in excess of the dividend and close to analyst expectations, but NAV Per Share dropped materially.

This is not an isolated incident.

Even the promise of a much bigger GSBD – thanks to a forthcoming merger with its sister BDC that is promised to be NAV and earnings accretive –  could not help the stock price in the short term.

Still, neither of these price reversals were very extreme.

GSBD remains priced at a premium to par and trades at 11.2x projected 2020 earnings.

Analysts project higher earnings in 2020 than in 2019 for SLRC – the above problems notwithstanding – and the forward multiple is still a high 11.2x.

In neither case – according to the BDC Reporter’s assessment – is the current dividend level at risk in the next 12 months at either BDC.

We might even see a bounce back next week in their price, but we admit to having a mixed record (at best) calling short term price movement in BDC stocks.

The market favorite was HTGC, as we’ve remarked, which saw its stock price increase 4.8%.

HTGC is now trading at its highest level in more than 5 years, as the chart below illustrates. 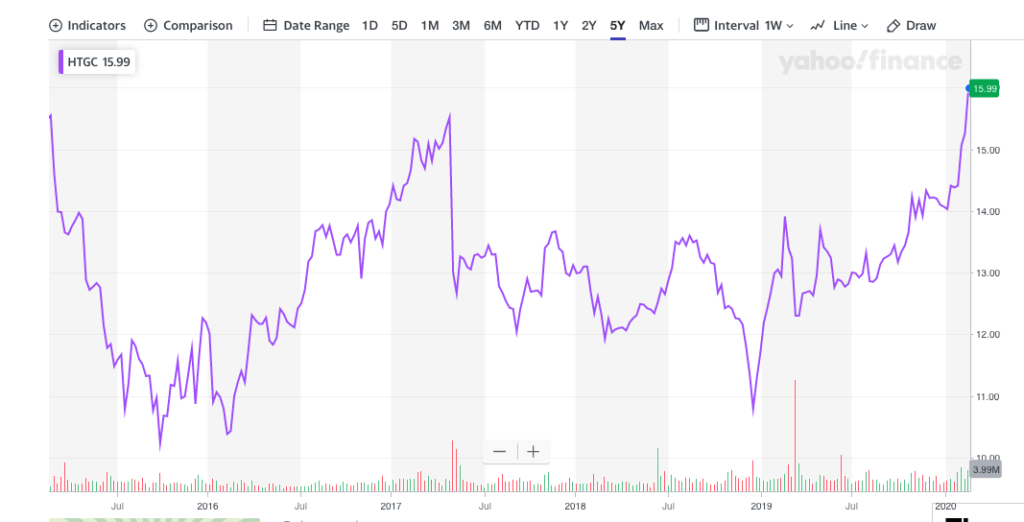 Over this time frame, HTGC’s stock price has ranged 40% from high to low yet the current quarterly dividend has only varied by 1 cent (either $0.31 or $0.32 per period).

Even looking forward, future earnings are projected to be only modestly higher in 2020 than in 2019.

The BDC Reporter believes this wide price variation reflects the ever changing nature of  BDC investor sentiment even in the face of very consistent financial performance.

That variation in HTGC’s price probably says more about the investors themselves as a group than the BDC.

Investors are currently in an optimistic period, with HTGC at its highest recent level trading at 11.5x future earnings and an impressive 55% premium to book.

All we’d say to would-be buyers who find that premium a little too high to stomach: just wait a little and something will change soon enough.

In line with the overall good BDC financial performance, distributions were generally favorable.

No BDC reduced its regular monthly or quarterly pay-out.

The dividends of ORCC, GSBD, SLRC and SUNS remained unchanged.

Most spectacularly of all, TSLX offered up a double whammy: an increase in its quarterly distribution from $0.49 to $0.51, and two “special distributions” coming in April for a total of $0.50.

That’s partly reflective of the BDC’s dividend strategy of paying out every quarter way less than GAAP Net Investment Income.

The result is an ever larger balance of undistributed net investment income.

However, there are distribution rules to obey and TSLX was more forced than anything else to reward its shareholders with the payout of historical earnings.

The BDC managers are not shy to admit that they typically seek to boost the BDC’s NAV by hoarding taxable income rather than paying it out.

The argument given is that raising capital in this way is less expensive than by issuing new shares.

The BDC Reporter is on the record as being unconvinced by this argument.

After all, equity capital raised the old fashioned way is a long term proposition.

Holding back earnings that could otherwise be paid out is a technique that can last only a short time before the monies have to be paid out anyway.

Bulking up a BDC’s NAV by holding back what might otherwise be paid out to shareholders – as opposed to achieving realized gains or selling stock above book – is no great achievement, and more in the way of short term financial engineering.

Still, TSLX is one of many BDCs trying out various dividend policies to boost their reputation with shareholders and their stock price.

The week ahead will very informative.

Of course, we’ll see if the spreading of the coronavirus will continue to spook markets.

Or, like so many times before, investors will stay calm and carry on.

There will also yet another week of BDC earnings to confirm or contradict the current trend of relatively positive results.

To date we’ve had no BDC announcing major problems and no unexpected dividend cuts.

There has been no double digit drop in an individual BDCs stock price either.

Will this continue or is this just the calm before the storm ?