We won’t discuss the BDC rally as we’ve been doing of late because prices have come slightly off the high boil of Monday April 12. We may yet get to write about new price and “total return” highs but not this morning. Instead, we have two BDC proxies to dissect from very different Ares Capital and First Eagle Alternative Credit and a preview of results from PennantPark Investment, which should be market moving in this trigger happy market environment. We’ve spent more time than usual on the BDC proxies because there are interesting lessons to be learned therein for those interested in going beyond the boilerplate language and the pastiche “shareholder democracy” involved.

We know this is a deadly dull document for most shareholders and for us, but we glanced through anyway. Let’s gently tackle a difficult subject that nobody wants to talk about – the divvying up of the earnings pie between managers and shareholders. It’s unpleasant to talk about money but what the “independent directors” do – or don’t do – on behalf of shareholders is critical to one’s long term investing returns.

First, here is the amount of compensation paid to the external manager in 2020 and the amount of the “allocable expenses” charged to the BDC:

To put the compensation into context, Net Investment Income was $794mn, and $679mn in dividends were paid out.

A new calculation we’ve come to make of late is Income Before Compensation, which was $1.195bn and is the sum of Net Investment Income and management and incentive fees, as well as capital gains fees although there were none this year.

Using that new metric, we can see that shareholders received in dividends 57% of Income Before Compensation and Net Investment Income – presumably eventually headed into shareholder pockets or used in the business – was 66%. Or, put another way, the external manager received one-third of ARCC’s income generated in 2020.

In 2020, ARCC booked a multi-year high realized loss of ($166mn) and total losses – both realized and unrealized – of ($310mn).  In that yearly context, and using the total losses number, the net gain for investors when Net Investment Income and losses are combined was $484mn. That also implies that shareholders received 55% of all net gains in the year and the external manager 45%.

Because ARCC’s independent directors have not negotiated a “look-back” provision in the external manager’s compensation arrangement, the incentive fee was not affected by the losses incurred. Furthermore, ARCC charges a fee of 1.5% on all assets up to 1 to 1 debt to equity and 1.0% on amounts thereafter. We calculate  – in very rough terms because we don’t have access to all the numbers that go into the calculation – that if the independent directors had negotiated a management fee in line with what Goldman Sachs BDC and other peers are charging, which is 1.0%, ARCC’s shareholders would have received $75mn in additional Net Investment Income, a 9% increase. If those savings had found their way into dividends, the payout would have been 11% higher. The $75mn would have offset 45% of the year’s realized losses, but reduced manager compensation by (5%).

By the way, here is the compensation level for the independent directors – extracted from the Proxy:

Furthermore, here is the stock ownership of all directors: 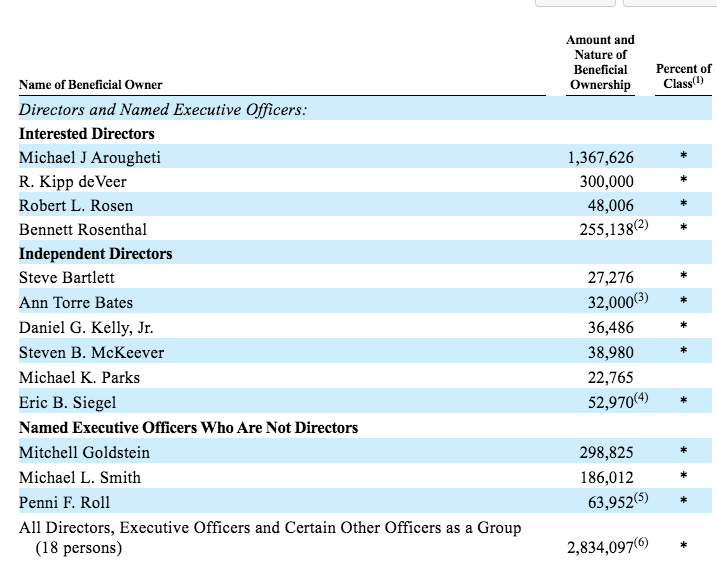 For the footnotes, see the Proxy.

We will leave our readers who are ARCC shareholders to decide if the current compensation agreement with Ares Management that has been periodically reviewed by the “independent” directors is adequate, or not.

Of course we have no illusions that even disgruntled shareholders will or could rock the boat but the BDC Reporter can at least open the debate about this thorny – but critical – subject.

“As part of the annual governance review by the Board in 2017, the Board reviewed the Company’s Second Amended Certificate of Incorporation (the “Second Amended Certificate”) to confirm that the provisions therein are consistent with the Delaware General Corporation Law (“DGCL”) and to determine if any further clarifying changes are necessary. In connection with such review, the Board determined that it was necessary to clarify, among other things, the procedures by which a director may be removed by a stockholder vote and whether a director may be removed by the Board by adopting an amendment removing Section 5.4 from our Second Amended Certificate. At the Company’s 2018 annual meeting of stockholders, stockholders were asked to approve amendments to the certificate of incorporation to revise Section 5.4 in order to remove any inconsistency with the DGCL. Although the proposed amendment did not receive a vote of the requisite majority of outstanding shares necessary to amend the Second Amended Certificate under Delaware law, the Company stated in its proxy statement that if the amendment was not approved “our stockholders will continue to be entitled to the ability to remove any or all of our directors by a vote of a majority of shares entitled to vote at an election of directors.” In order to avoid any uncertainty, we are once again seeking approval to amend the Charter to remove the ability of continuing directors to remove a director for cause, and to permit shareholders to remove a director upon the affirmative vote of the holders of a majority of the shares. The following chart reflects the current Article V, Section 5.4 and the proposed revised version to the Third Amendment Certificate, which is attached hereto as Appendix A:

Text Prior Certificate Provision Section 5.4 Removal of Directors. Any director may be removed for cause from office by the action of the holders of at least seventy-five percent (75%) of the then outstanding shares of the Corporation’s capital stock entitled to vote for the election of the respective director. Any director may be removed with or without cause by approval of at least sixty-six and two-thirds percent (66 2/3%) of the continuing directors (as defined in Section 9.1).

The highlights are ours.

We don’t fully understand why the external manager and the Board are so keen to have a second bite at this issue, but don’t see the practical harm in shareholders voting yes. Given what happended in 2018, though, that may not be a given.

By the way, given the discussion of compensation re:ARCC above, here is the comparable data for FCRD. First, the external manager’s compensation was a net $1.5mn only, thanks to a reversal of $0.4mn in incentive fees and a waiver of ($1.8mn) of management fees. Shareholders netted $10.8mn, or 88% of the Income Before Compensation. However, those are unusual numbers and the manager’s percentage of income earned should increase.

FCRD managed to book realized losses of ($44.2mn) and total losses of ($47.7mn), which explains the manager’s fee waiving.

At the moment, FCRD is only charging a 1.0% base management fee but the new external manager has not committed – and the Board has not asked – for the change to be made permanent. We quote from the latest 10-K:

Not to be pedantic but there’s a substantial difference between permanently fixing a lower compensation rate and the manager periodically CHOOSING to waive some portion of the amount due.

This leaves the possibility that at any time after IQ 2021, FCRD’s compensation costs could increase if the external manager balks at future waivers, which creates a major uncertainty about post IQ 2021 earnings.

Here is the compensation level of the FCRD directors, which you’ll notice is substantially lower than ARCC’s:

To complete the picture here is the beneficial ownership of FCRD stock by its insiders: 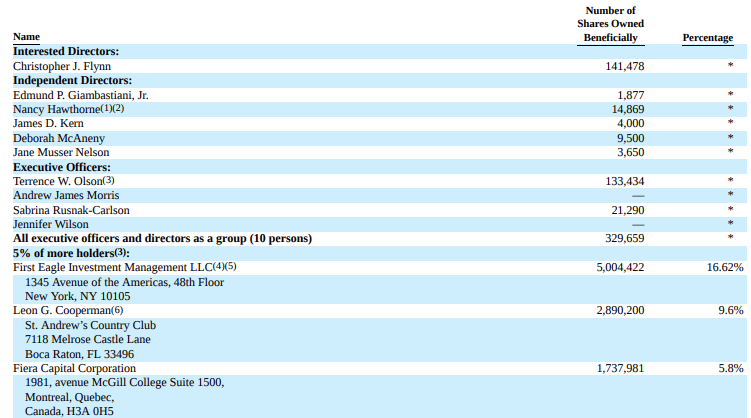 As you might expect given the performance of FCRD recently (-25% total return over 5 years), the independent directors have a modest stake in the BDC’s stock with an average value of about $28,000 at the current price versus an average director’s fee of $143,800.

We also note that CNBC-famous Leon Cooperman remains a major shareholder. Over the years Mr Cooperman’s position has grown. Back in 2017 he owned 1.8mn shares of what was then TCRD.

Fiera Capital Corporation is a publicly traded Canadian asset manager and is new on the scene at this sort of ownership level, and was not listed in last year’s Proxy.

No great surprises in the numbers offered. The NAV Per Share has jumped substantially, but we’d guess most of the growth is in the unrealized value of a few key equity stakes the BDC owns and which has been boosting its net assets for several quarters. More important is whether the BDC has or will sell any of these non-income producing investments to help its recurring earnings. Those seem to be unchanged at $0.12, which is also the amount of the current dividend. As of IVQ 2020,  16% of investment income and an even bigger portion of Net Investment Income was in pay-in-kind form. We wonder if that has shifted ? Likewise, Net Investment Income has been boosted by the fact that the BDC has been waiving its incentive fee, and has committed to do so through the IQ 2021. However, should that generosity lapse,  on  pro-forma basis, we calculate Net Investment Income Per Share could drop by (20%). This suggests that any increase in income that MIGHT occur from these increasing equity positions being sold and re-invested might go first to paying the external manager all compensation earned rather than result in an increase in distributions, as some shareholders are yearning for.

Total debt outstanding appears to have increased from $549mn at year end 2020 to $571mn, and cash has increased to $34mn from $20mn, suggesting PNNT is both more leveraged and more liquid. The planned unsecured debt raise will change the situation shortly.

We finally completed our research into Ares Capital’s (ARCC) IVQ 2020 investment portfolio. However, we found so much interesting content that we’re breaking our findings into two back-to-back articles. Part I looks at the number one BDC’s shifting level of underperforming companies since IVQ 2019 to the end of 2020. Moreover, we’ve looked in detail at the several significant non performing borrowers in the BDC’s 350 company portfolio.

Coming up next is a review of troubled companies that are still paying their interest bills as we try to assess what the future may hold for the top players involved. We’ll also be unveiling a table that shows every underperforming ARCC company and provides a wealth of information about each.

We have drawn some conclusions of our own, but each reader may have a different take on which way the BDC’s credit fortunes may go once you’ve read both articles.